Diana Brimblecombe Animal Rescue Centre is involved with pet welfare and is always looking for people who are interested in adopting and giving new homes to pets that need rehoming. If you want to get in touch, please remember that organisations like this typically only work during office hours and may take a little time to answer emailed enquiries. 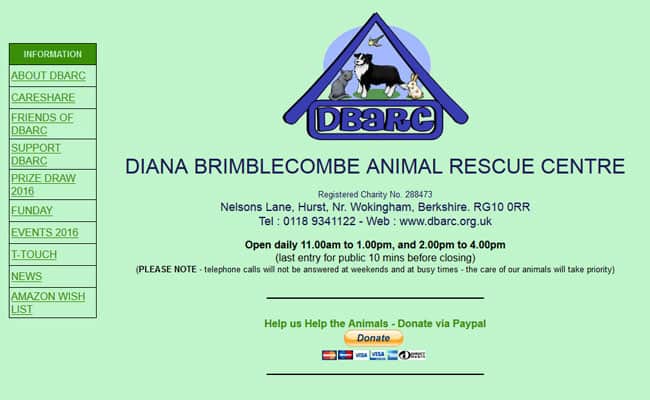 Diana Brimblecombe Animal Rescue Centre, Wokingham – The Diana Brimblecombe Animal Rescue Centre in Wokingham was founded over 50 years ago, originally based in the home of Mrs Brimblecombe, who was awarded the MBE for services to Animal Rescue in 2001. The Charity has helped thousands of unwanted, stray and neglected animals over the years. The charity is now based at an independent, purpose-built and properly equipped 14 acre Rescue Centre in Hurst with specially adapted accommodation, all the animals taken in can receive the best of care. The charity relies on donations to keep afloat and, equally important, on animal lovers prepared to offer new homes for our pets.

Animal Welfare Groups often have limited manpower to deal with email enquiries so please don't use this form unless you are interested in adopting a pet, would like to make an appointment to view a pet you are interested in adopting, or unless you are volunteering to help in other ways. For the same reason, some pet rescue organisations may take several days to reply, so please be patient! Thank you.